Vapour Phase Hydrogen Peroxide (VPHP) is largely exploited as a sterilization agent due to its biocidal activity, and usage ranges from scientific and medical machinery to industrial applications1,2.

For the sterilization of research and pharmaceutical isolators, VPHP cycles are generally designed in order to maintain stable hydrogen peroxide concentrations – measured in part-per-million (ppm) – in time over its microbicide, fungicide and sporicidal activity level, considered between 300 ppm up to 1200 ppm.

Once the decontamination phase of the VPHP cycle is over, an aeration phase starts to rapidly decrease the vapour of hydrogen peroxide up to a concentration of 1 ppm. In fact, 1 ppm has been officially defined by the National Institute of Occupational Safety and Health (NIOSH) as the daily safety value for the operators and for the exposure of the production materials3.

Recently, several studies focused on the hydrogen peroxide residues upon the decontamination cycle and critical effects on the pharmaceutical products are now emerging. The oxidation of pharmaceutical molecules, the dissolution into liquid products and the adsorption within medical materials are just few consequences of the effect of sub-ppm VPHP concentrations4–6.

For instance, concerning the biotech pharmaceutical compounds that contain many aminoacidic residues sensitive to oxidative potentials, it does not represent a negligible topic. In fact, several groups are trying to mathematically model the effects of sub-ppm concentrations of hydrogen peroxide on their pharmaceutical products7–9.

However, the only way today to precisely assess the behaviour and impact on the drug substance in such specific circumstances is to run several tests that simulate potential and/or real conditions. This was the reason why Comecer designed an Isolator for Testing Ultra-Low H2O2 Concentration Conditions.

This modified isolator can accurately control VPHP concentrations ranging from 5 parts per billion (ppb) to a few ppm with a precision never before experimented through a system referred to as Ultra-Low VPHP (UL-VPHP™).

The UL-VPHP™ system works on the extremely accurate feedback loop of the hydrogen peroxide Picarro probe (Picarro PI2114 spectrometric gas concentration analyser, hereafter referred to as Picarro) that allows an online continuous measurement of VPHP concentration inside the isolator with an accuracy of ± 1 ppb.

The “hot” response which increases the VPHP concentration is based on an accurate dosing system which releases microdroplets to form the minimal amount of H2O2 aerosol. On the other side, the lowering of VPHP levels is based on the “cold” feedback, consisting of UV-C lamps. The electromagnetic emission catalyzes the H2O2 radiolysis, inducing its breakage into H2O and O2.

The system can work in two different modes: static or dynamic. In the first one, the set concentration can be stably maintained in time for hours and even days.

In dynamic mode, it is possible to set the time duration for a sequence of VPHP concentrations; in this mode, the UL-VPHP™ system can automatically move toward the next pre-set concentration at the end of each phase and keep that level stable for the desired time.

The figure a shows the dynamic mode of the UL-VPHP™ system in action. The table on the right of the graph resumes the recipe loaded on the software. 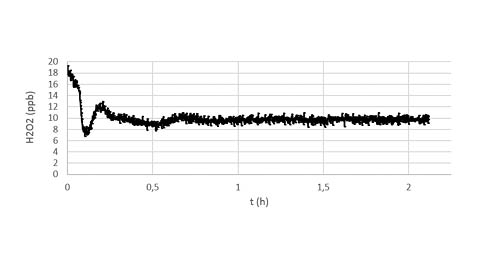 The figure b shows a magnification of the 10 ppb target performed during the recipe in the figure a.

As a result, the UL-VPHP™ system has achieved a unique performance in terms of stability and accuracy of ultra-low concentration at a ppb level.
This solution is ideal to execute static and dynamic product oxidation tests, H2O2 residue studies after decontamination and cycle optimization to minimize the decontamination time even with critical oxidant-sensitive medicinal products.

Comecer is also using this technology for material compatibility studies, disposable penetration tests and to provide our customer with a deep and complete understanding of the effects of the decontamination processes.